On January 14, 2017 a man died. He was one hundred and eleven years and one day old and he was called Zhou Youguang (the surname Zhou, which always goes before the name, is pronounced Jou, with J of John). The event went unnoticed, it did not go on many TV news, it was not trending topic on Internet forums, no high official was expected to attend his funeral. And yet, Zhou Youguang, economist, banker, sinologist and linguist, was one of those men who really changed the world.

Zhou Youguang was born on January 13, 1906, in Jiangsu province. In 1923, young Zhou graduated with honours from high school and was ready to study economics and linguistics at the University of St. John of Shang´haiV. But since his family was so poor, he was almost unable to attend were not for a fundraising of 200 yuan from friends and relatives. Those 200 yuan would certainly would change the world, though at the moment nobody thought of it. On May 30, 1925, Chiang Kai-shek began his anti-communist crusade in Shang´haiV and Zhou was transferred to the University of Guangzhu where he graduated in economics in 1927. Our man married in 1931 and went to the University of Kyoto, Japan, to study with Marxist professor Haji Kawakami but in 1933 had to change plans because the Communist Party was outlawed and the professor arrested. Those were turbulent times indeed. In 1937 the Chinese-Japanese war broke out and Zhou fled to Shang´haiV feet so that I love you. He worked at the Sinhua Bank and later at the Ministry of Economy of the Nationalist government in Chóngqìng (pronounced Jóng chìng) in the Office of Agrarian Policy. After Japan’s defeat and the end of World War II, Zhou went to London and New York and, in 1949, returned to China full of hope at the birth of the People’s Republic. 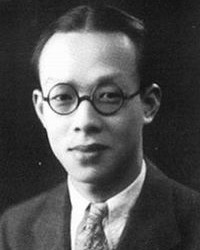 Zhou Youguang in the 20s

The Long march to Romanisation

But what would make Zhou Youguang special was neither the economy nor his banker career. In 1955, Mao Zedong’s government put him at the forefront of a committee for the reform of Chinese language with the aim of increasing the literacy rate of the population. The problem with Chinese is that it is not alphabetic but ideographic, that is, there is no connection between what is written and what it sounds and, what is a much more serious hurdle, to write Chinese you do not have to learn the 28 letters of the alphabet but you have to memorize word by word. Chinese written characters do not represent sounds but meanings, logos, ideas. These characters, the written words, can be grouped in radicals, which are simple strokes or hairlines that add to the set of strokes that constitute the whole character. Radicals have basic meanings like person, water, vegetable or hole. Some of them may even have imbedded some symbol of phonetic correspondence, as the syllable ma, but this does not spare us from the big job. All in all, to write like a common Chinese you have to memorize around 3,000 different characters, which is somewhat more difficult than to remember the spelling of our 28 letters. The issue is more serious than that since if we want to express ourselves in a cultured way, we will need to learn 8,000 different characters and, if we go for scholar, we will face the arduous task of having to know 28,000, which curiously makes a thousand characters for each letter of our dear alphabet. To this millennial difficulty we must add war and misery and the overall result is that four out of five Chinese were illiterate in 1950.

Zhou Youguang’s committee had to devise a system of romanization of Chinese language, that is, to put the sounds of Chinese into letters like ours. Obviously, they were not the first to have proposed it, very indeed. The romanization of Chinese has a long history. Among westerners, the first attempt was made by the Jesuits Mateo Ricci and Michele Ruggieri, they spent the five years (from 1583 to 1588) working on a Chinese-Portuguese dictionary. Sadly, the original manuscript was lost among the archives of Rome and was not discovered until 1934. That was really bad luck. In 1626, Nicolas Trigault, another Jesuit, wrote an «Aid to the Eyes and Ears of Western Literati» and, in 1692, Francesco Varo wrote the «Vocabulario da lingua mandarina». The best western system, a reference for sinologists of the first half of twentieth century, was the Wade-Giles, completed by British diplomat Thomas Wade in 1859 and revised and improved by Herbert Giles, hence its name. The other western reference is the Yale system, appeared in 1943 as a commission of Roosevelt government to improve the communication between American military and their Chinese allies in the war against Japan. Chinese themselves had also made their own attempts, of course. The first was the Guoyeu Romatzyh, work of Scholars Zhuo Yuanren, Lin Yutang and Qian Xuantang. Then came the Latin Xua Sin Wenz of Chinese Communists that stayed in Stalin’s USSR, including the famous writer Lu Xun. Another attempt is the BoPoMoFo of Taiwan, which does not use western letters.

On January 10, 1958, Zhou told that after three years trying to create a non-Latin alphabet without satisfactory results, Latin alphabet would be adopted with the Hanyuv method pin–yin– (which in Chinese means spelled sounds of the Chinese language). «In the future we will use the Latin alphabet for the romanization of Chinese words.»

The virtue of pin–yin– is its simplicity, to make easy what is difficult (or impossible, considering the pain of typing Chinese in a computer, moreover in a typewriter). It is said that Confucius, the wiseman who lived 2,500 years ago, claimed being able to teach the most complicated concept to the most simle-minded creature. There are those who believe that knowledge and culture can only be reached by privileged minds, the chosen ones, the selected, the pioneers. From this it follows that those who make these assertions always include themselves in the selected lot since, if they were not part of this elite that understands art and wisdom, how could they make that assertion? Confucius thought this is not the case. He believed that, with the right opportunities, the many can learn a lot and, fortunately, the financier Zhou heeded him. 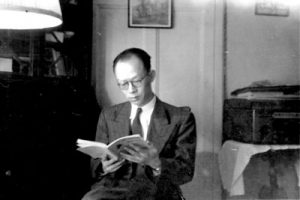 A first difficulty in the romanization of Chinese is that Chinese people speak singing, that is, they use four tones. Pin–yin– and Yale represent tones with diacritical symbols: –  ‘   V   ‘. Wade-Giles uses numbers 1, 2, 3, and 4 and the Guoyeu Romatzyh adds terminations h, er, or changes u by w.  Intuitively, the first tone (–, sometimes this tilde is omitted) is that of the imploring question. When you have to tell a grumpy boss that… horror! I don’t have the report for today! You enter the office contrite and, in a trembling voice, you ask, implore, whisper, «Can I submit it… tomorrow?». And that «rrow» of “tomorrow” is the first tone. The second tone (´) is the insistence. A gentleman explains his feats of youth and we see we are gonna miss the subway. “Can you believe I did all that?” “Yes, yes.” “Sure?” “YeeS.” “Look, it was very meritorious, huh. Do you realize how great it was?” “YeES. YeES.” Second tone is also guilt acknowledgment: yes, it was me. Face it! YeES, YeES, it was me. Third tone (v) applies when an ultra-boring guy makes a redundant statement. Seated, half asleep, we care a cucumber about what that he is saying. Without haste, resigned to our lot, we nod heavily and say: YAaaAH, YAaaAH. Fourth tone (`) is when we say goodbye to a very boring guy, just before slamming the door. The tones the word pinyin are first and first so Pinyin is written pin–yin–.

A second difficulty with Chinese is that it has 36 basic sounds, therefore the 28 sounds of our alphabet are inadequate. Thus, sounds ch and J (as in John) unfold each one into two sounds, one palatal the other labial. To solve this inadequacy, pin–yin– makes some of our letters sound in a rather peculiar way. If we do not know those peculiarities, our mistakes will stand out horribly and we will believe that pin–yin– as a very difficult system. However, with four simple rules, just four, we will avoid most of these bulky mistakes. The first rule points to C. In pin–yin– a written C sounds like TS (therefore Cáo Cao, the bad guy from the movie Red Cliff, is pronounced Tsáotsao and not Kaokao). Second rule has to do with CH and Q. In pin–yin– CH sounds a palatal CH, and the letter Q is pronounced as CH labial (thus, the Qín dynasty is pronounced Chín, ch labial, not Kin). Third exception concerns with J (of John). Palatal J is written Zh (China in Chinese pin–yin– is written Zhong–guov and sounds Jon–guov). Fourth rule is that written UI is pronounced uei (An–Hui–, the Chinese province homeland of the Keemun Tea, sounds An–huei–, with h like in Hans). All this results in simplicity. To write Cáo Cao is simpler than writing Ts’ao2 Ts’ao1 as in Wade-Giles, to write Sìchuan simpler than Szechwan, even Guov yuv Luomazi is simpler than Guoyeu Romatzyh and Laovziv simpler than Lao3Tzu3. This simplicity made that even the «Rebel Province» Taiwan ended up adopting the pin–yin– to replace its dear BoPoMoFo.

But simplicity does not mean less and worse knowledge. Putting knowledge within the reach of common people does not imply that knowledge should be adulterated or devalued. It is about raising the education of people, not confusing them in the swamp. In the 1920s, the Chinese Communists in Russia, with the collaboration of famous writers like Lu Xun, proposed the system Sin Weiz. They wanted the scheme so simple that they eliminated the four tones, moreover, X and H were written the same, and also wanted to supress ideographic writting. This cannot be because a single sound may correspond to many words with different meaning, and conversely, different ideographic writing. Therefore, to simplify whatever it takes will have terrible consequences, like saying “fat” when we mean “flower”. 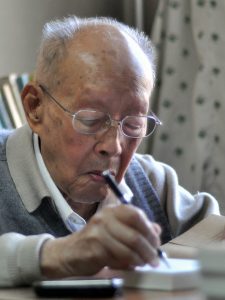 The Cultural revolution instigated by Mao was an attack against anyone who had enough knowledge to teach. Zhou–Youvguang belonged to this rogue group whose terrible crime was to know too much. Obviously, for pre-emptive reasons he was sent to be re-educated through labour (Láodòng jiàoyǎng). Since they worked twelve hours a day and sanitary conditions were poor, this re-education took away the life of many of its involuntarily recruited students. Zhou–Youvguang– came to the work camp with more than 60 years but, by some sort of magic, he outlived many younger companions. Later, he would say that optimism was what kept him alive. With Mao’s death, Zhou–Youvguang– was released from learning through work and was given a position as university professor. Since then he published language history books and defended the idea that economic reforms should be accompanied by democratizing efforts. His position in front of the events of Tianamen Square in 1989 did not earn him many governmental sympathies either.

Thus, our man died silently, the father of a system that has helped billions of human beings to understand Chinese. Few heads of state will ever have the influence of Zhou–Youvguang–, although, in recognition of those earlier attempts of romanization of Chinese, he used to say: «I am not the father of the pin–yin– but the son of the pin–yin–«.