Battleship Musashi or on the soft and the hard

Battleship Musashi or on the soft and the hard

Borneo, October 1, 1944. First machinist Takeda Masahiro ‘Masa’ has been days suffering the same nightmare. Anxiety! Drowning! Heart is gonna explode! The climate of Borneo is unbearable. To work in the belly of Battleship Musashi with that heat and humidity is really hard.

There’s always a way out, Masa.

—There is, you’ll see. If things turned nasty, they would bring us above.

—Each night, again and again. It’s a horror. Enclosed, down here, no air to breathe. And that steel door two levels above is so thick, you guess how much it weighs.

—You are the engineer.

— You’re so pessimistic, Masa. The door is to protect us. Why should it get stuck? Not even a grenade would move it.

—You think too much, engineer.

—What did they say?

— It could be that the war is not going as well as they say. It’s been three years already and …

—Shut up! Shut up! If you keep saying like this I could not … Maybe I’d be forced to …

—You are good fella, Takeshi. You know, here in the bottom thoughts …

—What did they say?

—They told me that in the Marianas we lost the Taiho. It was the last one.

The buzz of the machines is deafening.

Takeshi pauses. The buzz of the machines continues relentlessly. At the bottom to hear others’ conversation you must nail ear. Takeshi has already made up his mind.

—So, what? The fleet of battleships is unscathed. We only lost the Mutsu, and it was not the Americans.

—This shows that a battleship can also fall.

—That was a fortuitous explosion from within —Takeshi gets air with a sigh—. Masa, Masa, remember where you are!

—Down here, under seventy thousand tons of steel.

—You should feel lucky, and proud. In Prince Motors you were a car mechanic, you were good and you were aiming high, we know it, those of above know it. That’s why you’re here, in the Musashi, the Musashi! You are the first machinist in the greatest warship of all time. You take care of our mother, of the heart that moves her. And she knows you’re faithful, she knows you get more power from her engines than the machinists of her twin Yamato.

— Planes, aircraft carriers … nonsense! We have not really engaged into real combat yet. When the Americans see the Musashi, they’re going to shit their pants. Our mother will protect us. Battleship Musashi!

Battleship Musashi, the second of the Yamato class. 73,000 tons, 263 meters in length, 37 in length, a bridge high as three buildings, 150,000 horsepower, and nine guns 457mm caliber that would smash any target within thirty kilometers. Awesome Musashi.

The Musashi from its bow

— That’s it. With this heat all we need is your distress. Look at our guns and you’ll feel reassured.

—At this bottom I cannot see them.

—But can imagine how we’re going to roast that ass of the Americans. You are a smart engineer, you can do this, isn’t it?

Long before, before the big change, before the war, good old Takeshi was a lawyer. One day, being alone, he confessed that for him there is law and logic, nothing else. Law above everything and numbers that fit. In the engine room of the Musashi philosophies do not work, it’s hell, it takes 20 minutes to reach to upper deck and grasp the sun. Takeshi knows this and he adjusts to his people. Principles remain the same but must be simplified. Cannons, steel, power, safety … ‘The Musashi is our mother’ repeats. ‘The walls of our hull are 41-centimeters-thick of the best steel, where would you be better protected, eh? Huh? «He repeats his mantra to the boys over and over again. The government has been smart to put Commissioner Takeshi on the machines. He knows how to raise the spirits of those who care for our ‘mother’s heart’.

—The new commander of the Musashi Toshihira Inoguchi is an expert in anti-aircraft warfare.

—Airplanes … that’s it, airplanes worry them.

—Commander Toshihira excels in many things, all the better, isn’t it? —Takeshi looks at the gathering— Let’s speak frankly, what can a plane make to us? Tickling? Besides, if a single broadside of the smallest of our guns brushes it, it’ll begin to fly like a fly drunk in sake. Ha!

He’s got it, the laughter squeaks in the metallic underworld. 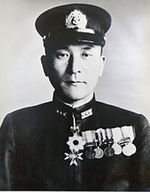 —I told you so —exclaimed Takeshi—, I told you he’s a competent guy. Common, let’s celebrate as it deserves!

Everyone laughs. Takeshi does know how to speak bluntly to the machinists, plain words, no legalities, no technicalities. He pours generous the sake kept for the event. In the bottom, only things from above can be celebrated, engineers have nothing to celebrate. 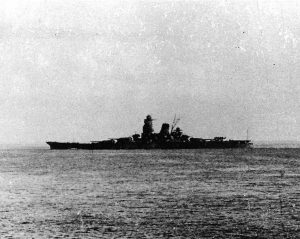 October 18. Black camouflage is applied on the deck. Something big is going on.

October 20. The Musashi joins force A, with its twin Yamato and the Nagato under the command of Vice Admiral Kurita Takeo. Operation Sho-I-Go, Operation Victory.

—We go to the Philippines. The Americans want to land in Leyte —Takeshi says as a confident.

—The Gulf of Leyte, where is your geography, oafs? Oh, oh, oh. The Philippines!

—Now they are gonna get it from us. In the 42, Kurita faced Americans, English, Dutch and Australians together. And, do you know what happened? Do you remember what happened?

—Well, he did not let them a single ship afloat, that’s what happened. And, do you know how many did we lose?

The murmur of the turbines is the sole response.

—None, we lost none —Takeshi yells arms raised. And now it will be even easier because the Americans are alone. Go get them! 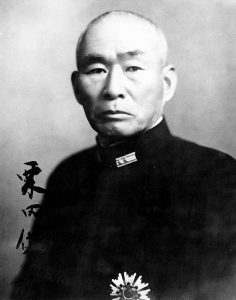 October 23. Strait of Palawan. The Atago sunk! It has been a submarine.

—The Americans are cowards. They always attack by stealth.

—It was just a cruiser. The Musashi is seven times larger. And Kurita is spared. Now he is in the Yamato. Americans cannot reach him there.

The cruiser Maya sunk. 796 sailors arrive at the Musashi.

07:43. The Musashi is stationed on the starboard edge of Force A. 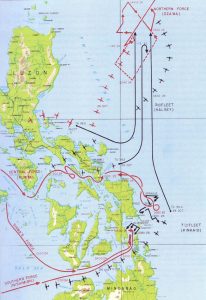 The clever Takeshi has befriended a fellow named Tomonaga. Highly advisable. Tomonaga acts as a communications link in the commanding bridge, he ones above, and he has pledged to tell everything he sees above. In the bottom helps a lot to know what happens above.

—There are planes up there, Tomonaga told me on the radio.

Wicked aircraft, on tenterhooks. The fellas are not aware of the danger, perhaps they don’t speak out.

—Poor Tomonaga must be deaf up there —Takeshi jokes. Everyone laughs. The boiler does not stop.

10:28 They are Curtis Helldivers! Dive bombers.

A rumor comes from the bow. Uncertainty.

Tomonaga confirms it: a bomb has hit turret one.

—The thickness there is 65 centimeters of steel, that’s why we’ve barely noticed —Takeshi says.

This time it’s rumble is stronger. Machinists fellas are frightened.

A torpedo has exploded to starboard. The Musashi list to starboard. 3,000 tons of water are allowed to enter to balance the ship.

—Give it more! We have to keep pace with the rest of the fleet.

—Two Avengers shot down —Tomonaga says on the radio.

—An expert, that commander of ours, an expert! Exclaims Takeshi — and good for Masa. 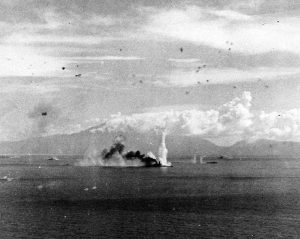 The Musashi under attack

—Leave that radio. To work!

—They are 80 kilometers away.

—Two 500-pound bombs penetrated the deck —those just below the thick door say.

—Here we are fine.

Silence. Everyone knows what this means. Poor fellows.

Enough to keep pace with the rest of the fleet. That’s what matters.

Two Helldivers shot down! All right!

And guess what … Tomogana is alive!

—That they attack us on both sides.

—So, what? We have anti-aircraft on both sides —Takeshi says. 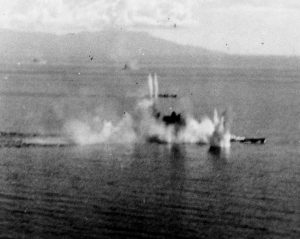 The Musashi attacked in the Sea of Sibuyan

13:31. Third attack. There are 40 planes! Avenger and Helldivers! Roar! Fire! The Musashi trembles!

—We have been hit by four torpedoes. Four! And three bombs hit deck!

—Nothing, we’re armored! Give thanks to the thick door!

—One of the torpedoes has reached the hospital in the bow! There are many victims.

—Give it to the boiler!

Speed 20 knots. We are making progress. 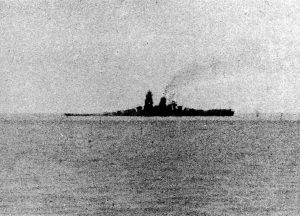 14:12. Fourth attack. 12 Helldivers. We continue at 20 knots. Tomonaga says that the cruiser Tone will come to support us.

14:55. Fifth attack They have counted 67 planes up there! They come from the Franklin and the Enterprise!

—The Enterprise! —says a veteran machinist.

—That aircraft carrier is a devil. We could not take it neither in Midway nor in Guadalcanal.

—Well, now she’s going to face the Musashi —Takeshi replies enervated—. How many guns, what armor does the Enterprise have, huh? A shit, that’s what it is!

15:25. Sixth attack. 75 planes! You cannot have so many! Del Franklin, Intrepid and Cabot.

—He’s hurt but he’s still on the second bridge.

—There is hope, then.

Impossible to breathe. The metal walls red-hot. Two guys have got their backs burned. No doctors. Their screams are barely audible. The smell of burned flesh gives nausea.

A bomb hits the flag deck.

Another hits the hospital. There is no one alive there.

Other hits the starboard officer’s room.

Boiler 8. Where are they? Burned alive!

The axis of the propeller is twisted. The mother roars in her guts.

—We have to flood.

—There are people down!

—We have to flood!

—They are machinists, our fellas!

—The fleet is leaving! Kurita abandons us!

—Cruiser Tone and destroyers Shimakaze and Kiyoshimo stay with us!

—Two Avengers shot down. But that is no longer Tomonaga!

—And those who cannot walk?

—They stay. We will come later for them, later. 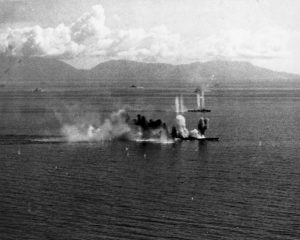 The soft and the hard

An aircraft carrier is essentially a floating hangar with a runway above it. An aircraft carrier has neither the guns nor the armor of a battleship, in a singular combat within the range of guns the carrier would not have any chance. But in World War II, the «weak» aircraft carriers were the owners and masters on the widths of the Pacific, they were the ultimate weapon that relegated useless battleships to oblivion. Curiously, in the Battle of the Gulf of Leyte, by a series of hazards, the Japanese battleships surprised the aircraft carriers of the 7th fleet and, interestingly, did not take advantage of the only opportunity they had.

«What is in the end to be shrunk, must first be stretched. Whatever is to be weakened, must begin by being made strong. What is to be overthrown must begin by being set up. He who would be a taker must begin as a giver. This is called ‘dimming’ one’s light. It is thus that the soft overcomes the hard, and the weak the strong. It is best to leave the fish down in his pool; Best to leave the State’s sharpest weapons where none can see them. «1

The verses of Lao Tse were written more than 2,000 years ago but they are always topical. The soft overcomes the hard, and the weak prevails over the strong, and so the root of the flower cracks the hard stone, and the dead is hard and stiff and the newborn born soft and smooth. And so, civilization went from stone to bronze, from bronze to iron, from iron to plastic and from plastic to etheric software. The weak overcomes the strong, also in our times, fall of 2017. You know what I mean.

—I’m going to look for them —Takeshi says—. You go up.

The water reaches the waist. Men bite with everything, their hands bleed. Moans of despair. They drown.

A rumble. Darkness. Hysteria. Sobs. Another rumble. Terrible. Machines stop. Steel crackles scarily. Heart is gonna explode. It is nightmare. Third roar. The roof collapses. More water. A gap! There is a gap!

The Musashi sank on October 24. 1,376 survivors were rescued, Takeda Masahiro reached the top, Takeshi, no. 1,023 crew members were trapped on the ship, including its captain.

This piece of writing owes to the website www.combinedfleet.com